Inspectors have to go to great lengths to take measurements on hard-to-reach places on industrial sites. But in 2022, rolling, walking and flying robots can largely take care of these dangerous tasks. This became abundantly clear during the SPRINT Robotics Fitness Challenge in Rotterdam. For software company Falcker, it does not matter how the data is gathered: it is about integrating the data into a single digital platform.

Robots and drones on the rise

Ask a classic science fiction enthusiast to draw a robot, and there’s a good chance that their sketch resembles C3PO or R2D2 from Star Wars. Nothing can be further from the robots demonstrated on the RDM Training Plant, the setting for the two-day Robotics Fitness Challenge, that took place on May 31 and June 1. Teams from all over the world demonstrate their rolling, walking and flying robots to asset managers and plant operators. But none of them resemble the robots we know from the science fiction movies of the eighties.

For example, those present marveled at the ‘robotic dogs’ from Boston Dynamics and ANYbotics, which, thanks to their lidar and cameras, can navigate through any environment. They are even able to climb steep stairs on their own. Also on display are various drones, including the recently announced Elios 3 from Flyability and a tiltrotor from Voliro Airborne Robotics, able to take measurements from all kinds of angles. Elsewhere, an FPV drone flies around, filming hard-to-reach welds at close range. Another eye-catcher is the large drone-in-a-box from Percepto, from which the Air Max drone with an integral optical gas imaging (OGI) camera – the first of its kind – carries out its gas emission inspection rounds. 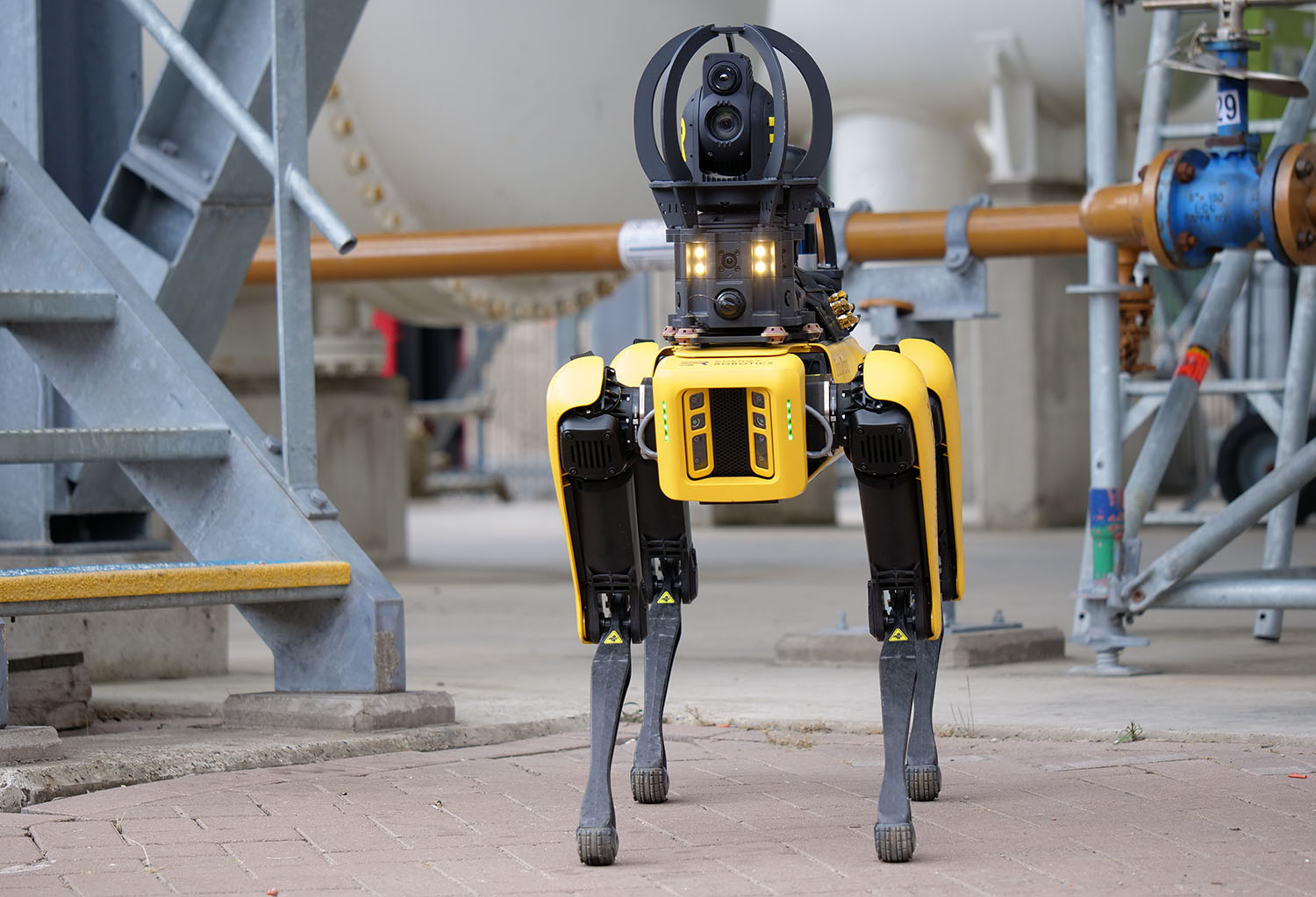 During the various challenges, the robotized inspectors are challenged to perform wall thickness measurements, check the readings on a few pressure gauges or detect a liquid leak (oil spill). The complexity lies in the industrial setting, with stairs, pipelines, confined spaces, flare stacks and platforms. The teams must perform the measurements as quickly and accurately as possible. Meanwhile, the robots also have to avoid people. 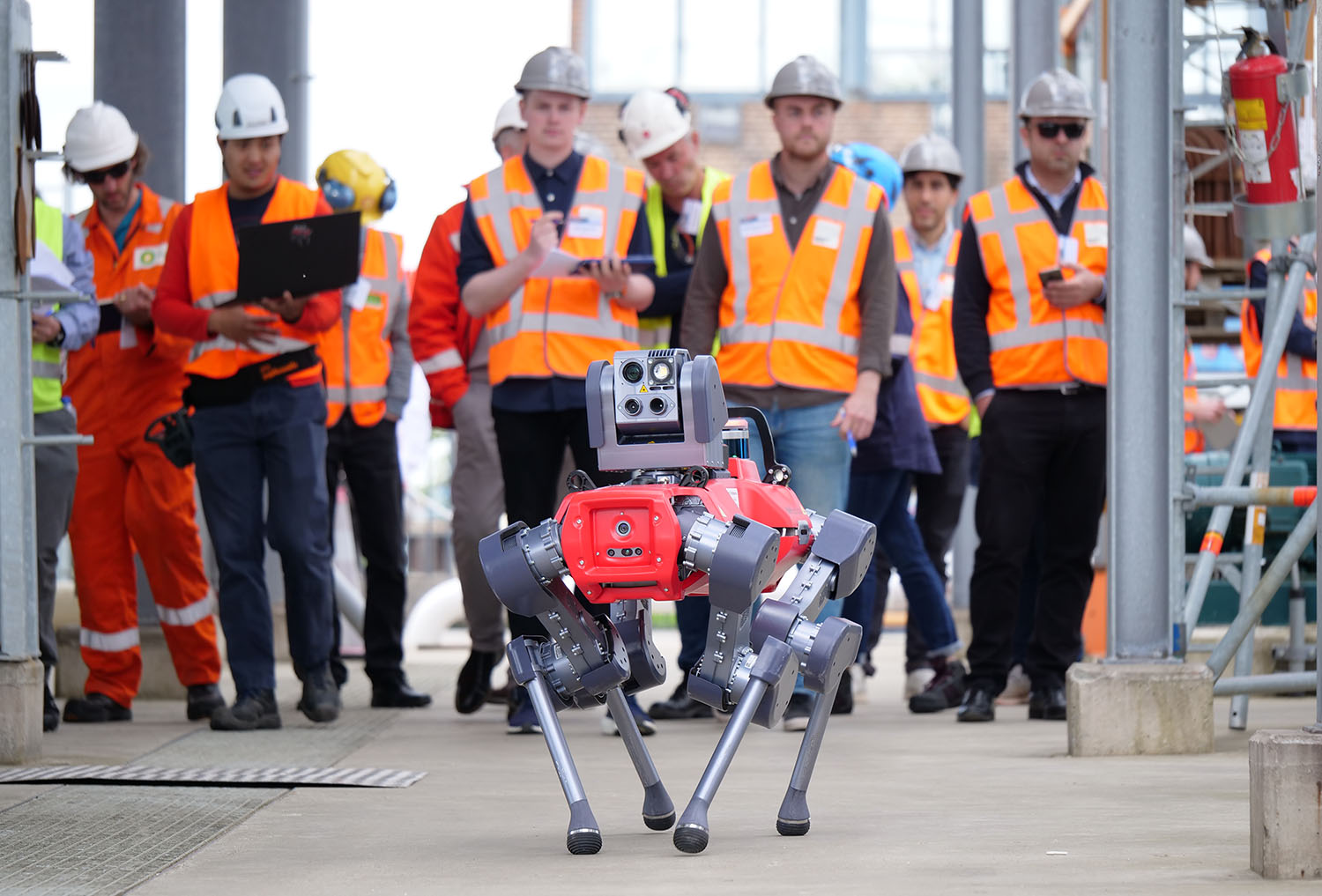 ANYbotics’ robot dog makes his rounds under the watchful eye of the jury.

One of the asset operations specialists of a large oil company is watching with interest. “I am particularly surprised by the possibilities that drones offer. I just saw a drone that can take wall thickness measurements from all possible angles. Unbelievable.”

He however recognises that there is more innovation needed before robots and drones can completely take over measurements from human inspectors. “An experienced inspector knows that the results of the measurement depend directly on how you apply the probe. It is very difficult to make consistent measurements. I wonder if a robot or drone offers the same finesse. Moreover, the reality of an operational plant is different from that of such a test environment.”

Niels Huttenhuis, of process automation company Yokogawa is also impressed. “In recent years, we have seen many PowerPoint presentations from companies that claim that they can perform all sorts of measurements and inspections automatically. Today we see their solutions in practice for the first time. Many of the promises are fulfilled, especially with regard to drones. I must add that for many of our customers the technology itself is only one aspect. It all still has to be integrated into existing processes. But the fact that the teams can carry out their inspections here within one day of arrival is telling.” 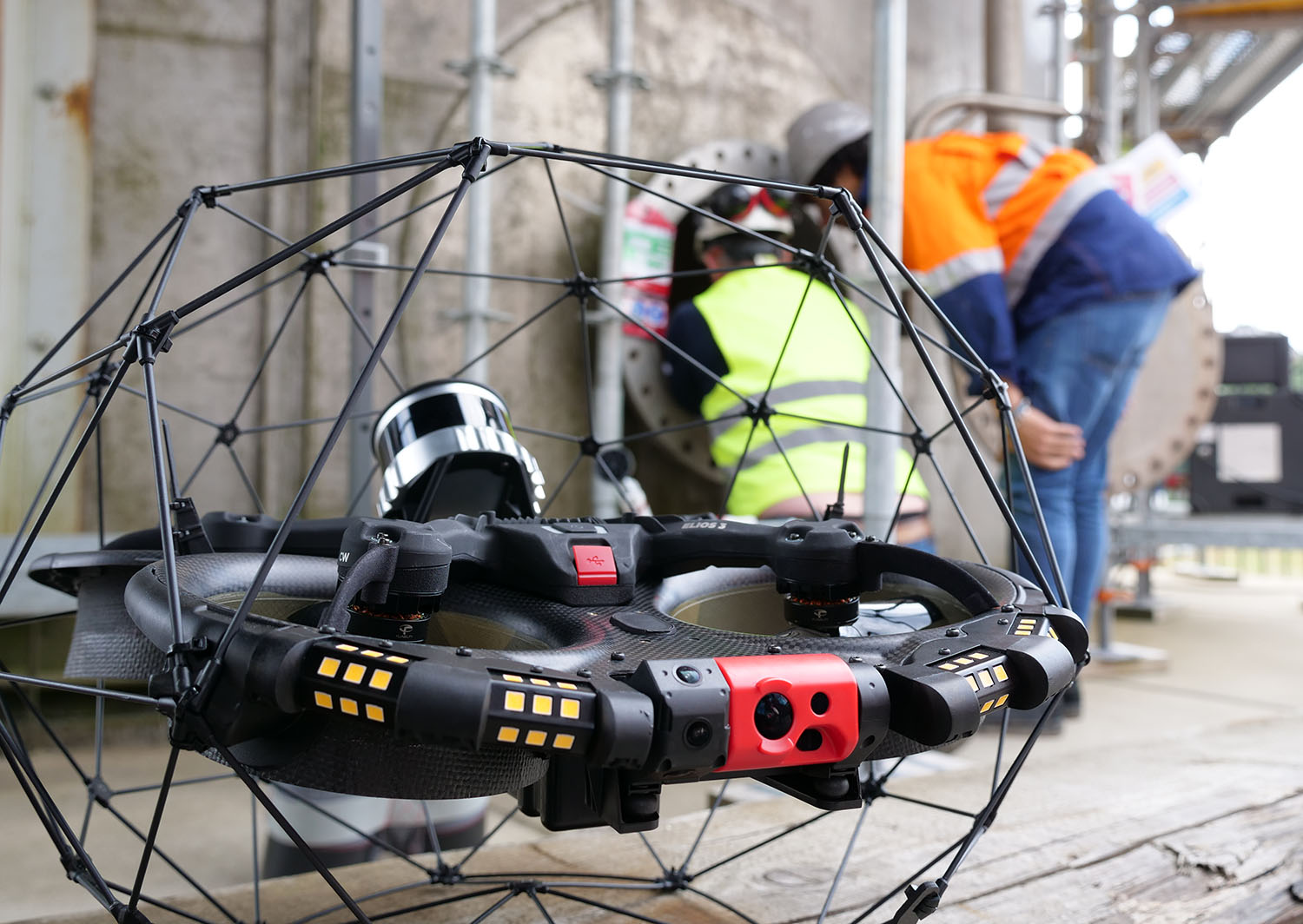 The new Elios 3 from Flyability, ideal for confined space inspections.

It is no surprise to Duco Boer (Chief Information Officer at Falcker) that drones make such an impression on visitors. “You see that drones are actually the front runners when it comes to moving payloads, responding contextually to the environment, and adapting their mission based on measurement data. With drones, thanks to edge computing, this is all already standard, and you can now also see that technology integrated in the robots.”

According to Boer, flying robots will eventually be able to perform most of the inspection tasks. “I think that in 80% of the cases drones can make all the desired observations. It is very convenient to work from the air. The rest can be performed by walking, rolling or even sailing robots. The challenge lies in integrating and providing insight into all that data. That is exactly what we do with our Digital Asset Care Platform. We don’t care how the source data is obtained. Even that one inspector who still wants to perform a specific measurement manually, is able to enter his findings via a tablet application. So there is still room for the traditional feel and smell.” 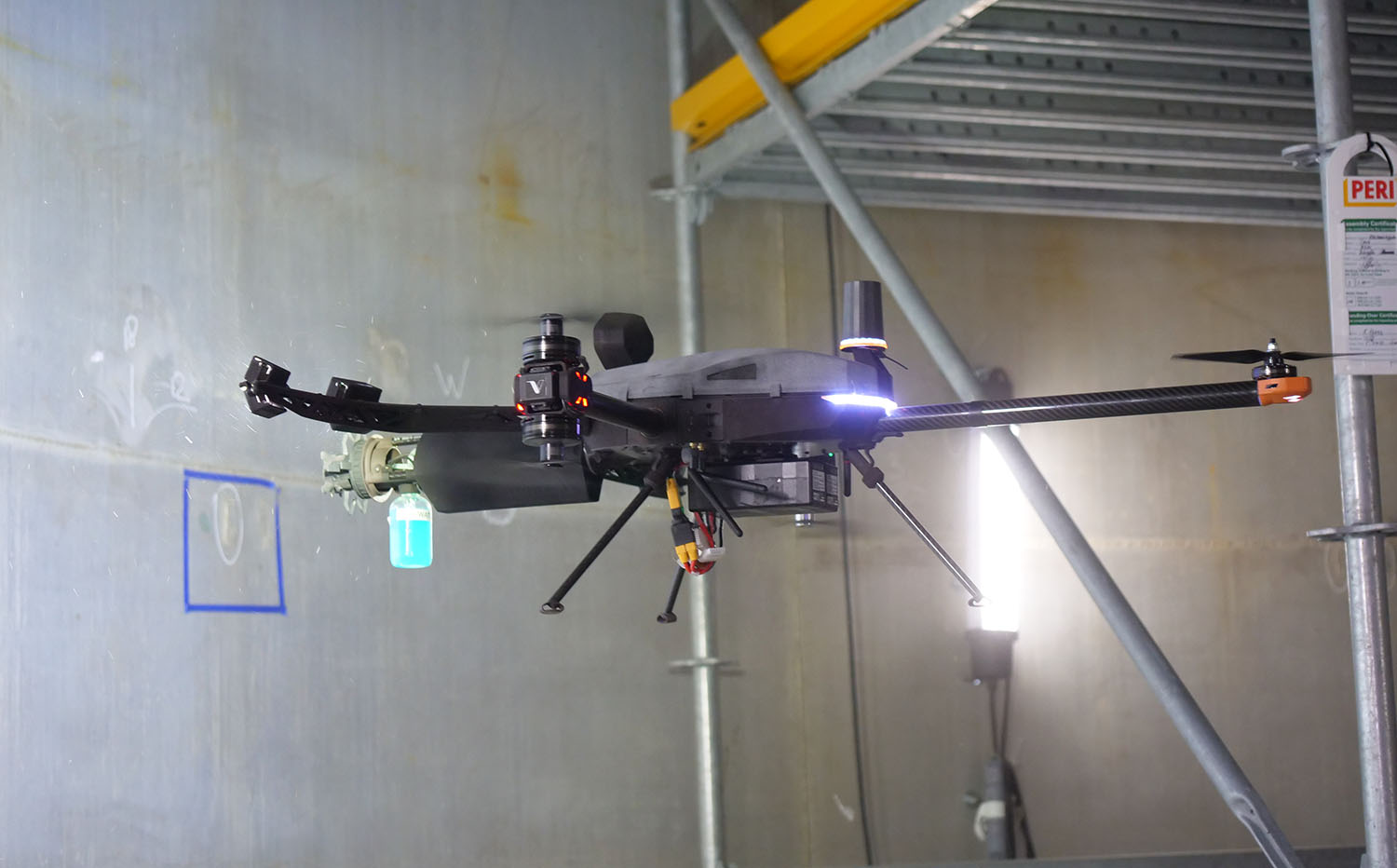 The SPRINT Robotics Fitness Challenge is an excellent moment for Falcker to show what the company has to offer in terms of innovations and operational support. From RT support for drone flights in the controlled airspace of Rotterdam The Hague Airport to the new OGI camera on Percepto’s autonomous drone, the agile drones of partner company Performance Rotors: the company offers tools to support asset inspections on all areas.

Boer emphasizes that Falcker ultimately aims to combine data and make it relevant and actionable for their clients’ operations, utilising software. “We are basically platform agnostic. As long as a supplier of a certain vendor offers an interface, we can connect it to our system. Our customer simply wants to be able to find all data from the different systems in one platform and not have to use a large number of different software platforms.” 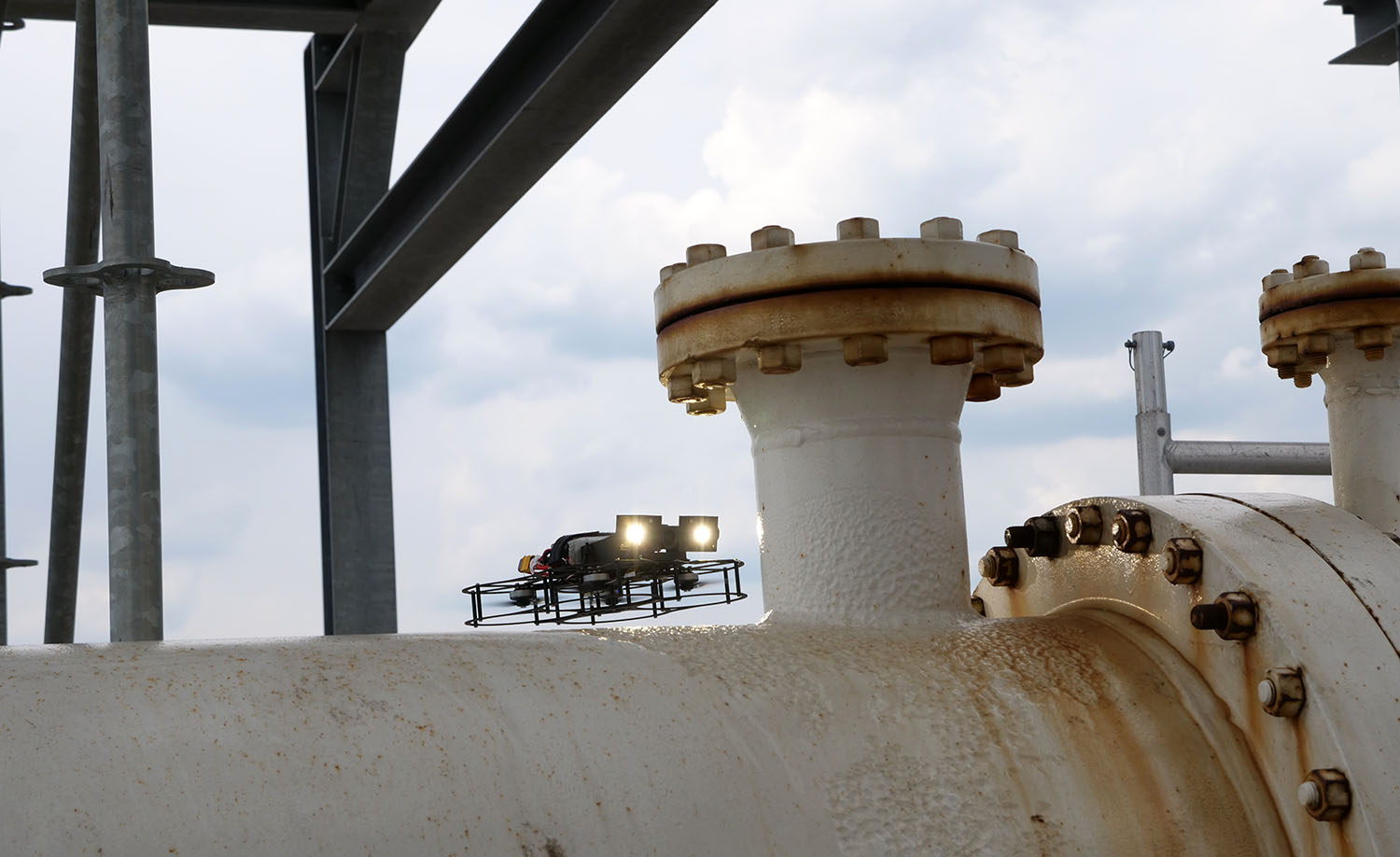 Weld inspection by means of an FPV drone

Falcker recently received an exemption to operate BVLOS (Beyond Visual Line of Sight) flights with Percepto’s system. That is also demonstrated. First, the system is taught-in: the flare stacks are designated as a no-fly zone, where the drone should not fly. Then the locations to be inspected are programmed with the desired camera angles in the form of POIs.

Carrying out the inspection round is then a matter of pressing a button. The box opens, after which the drone takes off to automatically perform the mission. An operator is watching from the mobile control room. The desired recordings are taken automatically. Thanks to the new OGI camera, it is even possible to detect leaking industrial gasses such as methane and sulfur hexafluoride. Afterwards, the drone returns to the docking station to be recharged for the next flight. 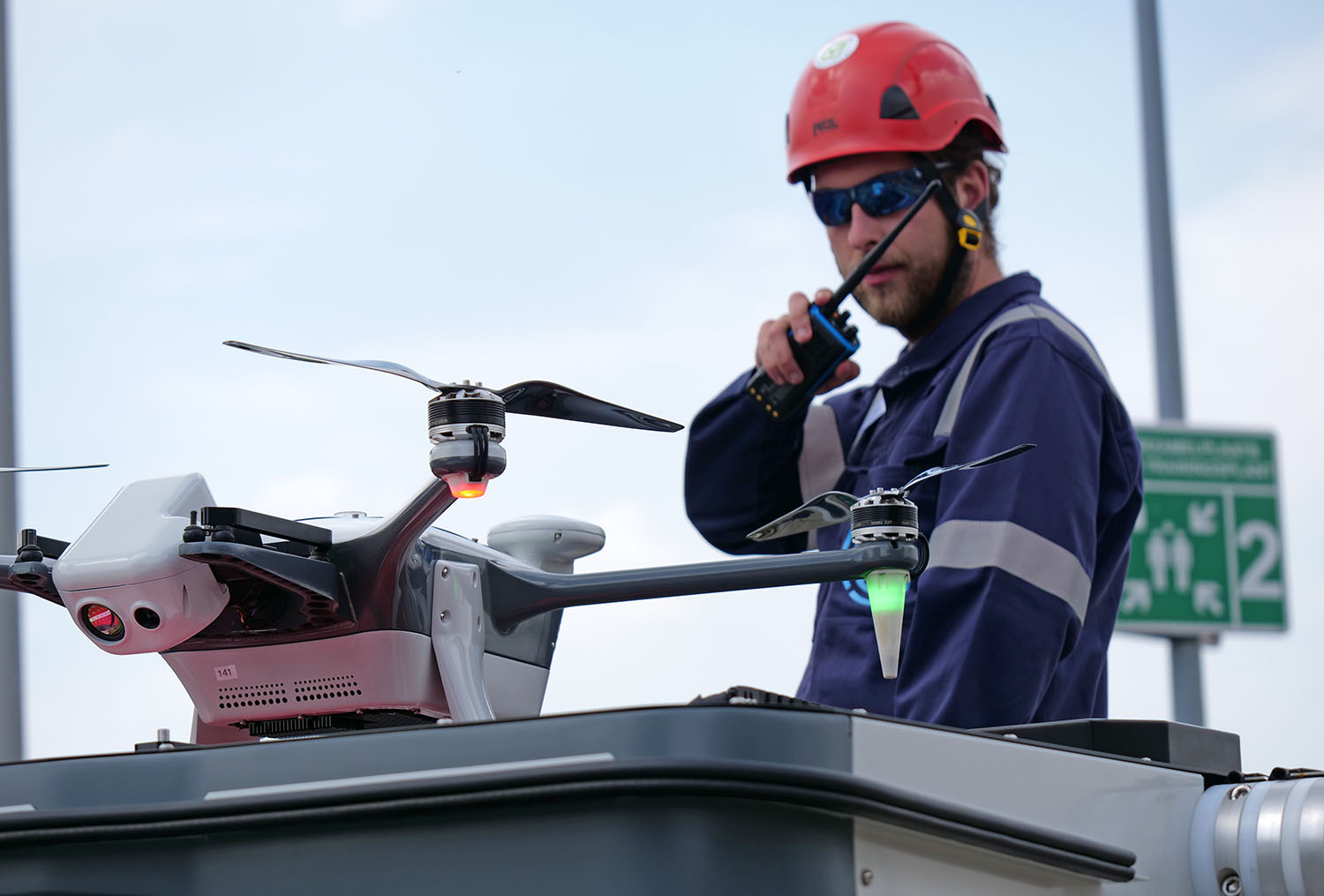 This article was commissioned by Falcker. For more information about Falcker’s products and services, visit https://falcker.com/. Text and photos: Wiebe de Jager / Dronewatch.nl.