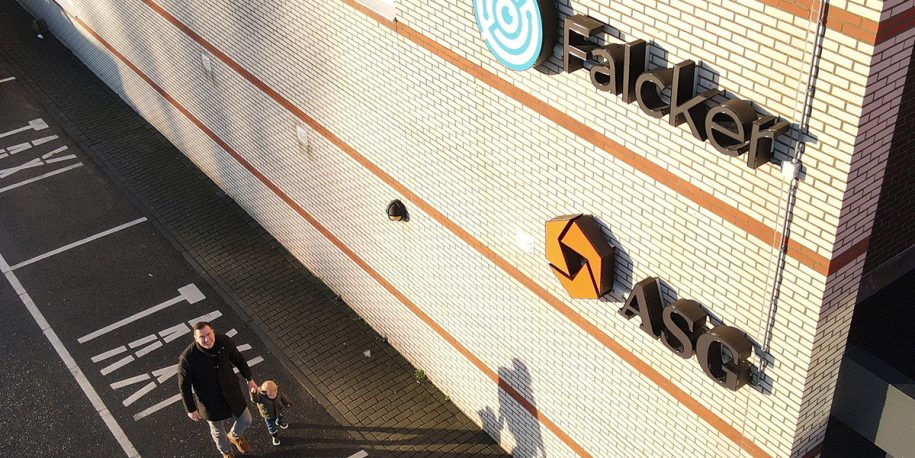 Sitting down with CEOs, there aren’t many that we’ve met that would draw a comparison between their business and their children. Luckily, our CEO isn’t like the rest, and with his vision, we’ve had a brilliant 2022 and are set for a very special 2023. Enough of us hyping the boss up, let’s hand the mic over to him.

“I have complete confidence that 2023 will be more ambitious, more challenging, and more rewarding than anything we’ve seen before. The way to get there will be dynamic, but with the team we have – everything is achievable.”

2022 has been my first whole year as a father. It’s also the first time I bought a house. Those are some pretty big milestones. A lot has happened. Not only has my family grown and developed, but the same can also be said for Falcker – which is my work family. To align these things at the same time is very special to me.

My kid is now running around the house and that is only going to continue. While Falcker has been around a few years longer, the industry has also watched us go from strength to strength as well. It’s been three years with the core team now, which means that at this point it feels like a tribe, not just a team. We’re all on the same page, with the same vision, but with different skills and perspectives. That’s so exciting because it can only drive positive change for the business.

We also welcomed new people to the Falcker clan this year with three new starters while at the same time getting further out into the world and making four separate partnerships with Percepto, Smart AIS, Skyebase, and Mapture.ai. That’s a lot of growth!

2022 was always going to be an ambitious year that required a lot of change. Part of that change is introducing yourself and the whole business to more scrutiny from external experts – particularly investors. At first, it can be difficult to take constructive criticism because you’re naturally very protective of your baby (business), but pretty quickly you realize it’s to make development quicker and more effective, so you really start paying attention.

One of the most satisfying parts of this whole year has been that our team, methodology, and technology have all been vindicated by big customers signing multi-year contracts. These are businesses that have a deep understanding of their own needs, so if they want to make us a part of that, we’re clearly doing something right.

The Next Stage of Development

We set some huge goals this year, but the next twelve months are going to be even more ambitious. Our team is going to get bigger, especially the sales team. We’re also going to invest even more in marketing and communications – we want everyone to know what we’re up to.

As usual, we’ll be on the hunt for new technology that can support our customers, and of course, we’ll be looking to onboard new customers as well. That’s not just in the Netherlands either, we’re developing further in Antwerp and Germany, using our partnerships to the fullest to grow.

And the Falcker platform itself is going to get broader and more robust. We’re working on adding modules that don’t just cover visual inspection, but actually support maintenance engineers, risk based inspection experts, and service analysis. We know our customers need these things, and we’re going to make them happen, especially when it comes to automating data capture and processing.

To cut a long story short, because I could happily talk about my family forever, we’ve gone beyond what we expected, but that doesn’t mean we’re going to take our foot off the throttle any time soon.

Want to be a part of the Falcker journey? Contact us today, to find out how much better we can make your asset inspection.